Who the hell travels to Paraguay?

Even weird-o cycle tourists like us seem to skip this country because… well what is there to see or do there anyway? Before planning the trip, I knew very little about this place. I could tell you the capital is Asuncion, which I would then spell wrong 3-4 times. I could tell you they picked a fight in the 1800’s and went to war with Brazil, Argentina, and Uruguay. I know they have a soccer team. But, that’s pretty much it.

To be honest, a big reason we wanted to visit was due to a lack of understanding the country, and the fact that we found very little online from cycle tourists who have made the trip. It seemed like the best way to truly take a less traveled road. Assuming of course… there were bike-able roads.

Many people actually cautioned us to avoid Paraguay. Before leaving for the trip, friends commented how little there was to see and how underdeveloped the country was. Argentinians we met warned us of an abundance of crime and shady roadways over the border. Online forums corroborated that petty theft and robbery were commonplace. When asking our Magic 8-Ball “will we be safe in Paraguay?” the response kept coming up: Better not tell you now.

Granted that we only were here for a few days, but we found Paraguay to be safe, scenic, and arguably more "developed" than neighboring Argentina. This is why Suzie and I always try and keep an open mind about places we choose to explore; these spots typically surprise us for the best and lead to unforgettable experiences. Looking back on this now, the South America route would not have been complete without this country.

Even the entry point to Paraguay was an exciting and “different” one. At the border between Posadas, Argentina and Encarnacion, Paraguay, the security officials let us know there was no way to cross by bike. We asked if we could walk them, they said no. We asked if there was another crossing nearby, they said no. For a little while, it felt like we were locked in Argentina and would not be able to escape north and follow the planned trip to Iguazu.

Thankfully, on every trip for the past 8 years, I make sure to pack a Suzie. This handy, dandy resource is great in situations where one person is telling you “no” but you want that answer turned upside down, erased, and converted to a “yes.” Suzie’s are great for all occasions where the man is trying to get you down and you feel like there aren’t any options to press on. Since 1986, the Suzie has been the number one defense against the all “you can’t do that,” “this is closed,” or “do not enters,” you’ll find on the road.

Here’s a few shaky videos recapping the experience how found a way to get our bikes over the border:

Part I: Border Control Strikes Back Once smuggled over the border, the vibe instantly felt different for us. The roads were crowded and chaotic with motorbike, car, truck, and pushcart traffic. The air was heavy with moisture and the blended smell of exhaust, street meat, and dust. Sidewalks were less for foot traffic than they for street vendors buzzing as they talked to each other and yelled things at their customers. Buildings were often incomplete or still under construction with rebar jetting out into the sky.

This… was more like it for me. I’m not sure what I expected in cycling in Argentina, but I never fully felt comfortable there; both with the conditions/traffic on the road and in trying to connect with the people. It was a real let down and, hard as it is to admit, made me think about ending the trip a few times. 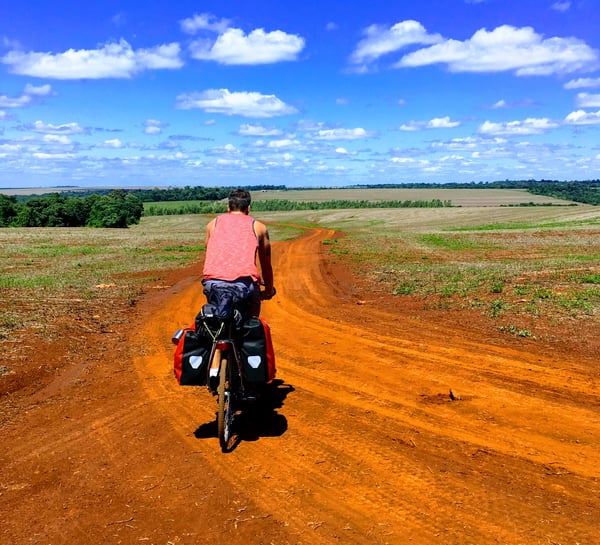 Paraguay served as a great “reset” to the trip in my mind. The people we met were much warmer, generally curious about our travels, and willing to lend us a helping hand if we ever needed it. We also landed in the best campsite of the trip so far just outside of Encarnacion. This spot was fully loaded with well maintained bathrooms, two pools, soft green grass to camp on, and a restaurant/bar; and we were the only ones who were there for the night!

The only issue that cropped up on us here was our sleeping bags. We hadn't been airing these puppies out since leaving Mendoza, meaning that the damp bags had been kept in a black dry bag, exposed to the beating sun, for over a week. If you ever want to try recreating the Manhattan Project at home... this would be a way to do it. The sleeping bags smelled as though a cat had crawled up into the bottom, went to the bathroom, and then died. You know it's bad when an all screen tent can't get enough air to make the smell go away. Just... terrible. Two weeks and a washing cycle later, we still have these hanging out our hotel window to try mending the damage. We are operating at about 78% depletion of bad scents today, and I hope to soon be reporting a cool 85%... but I have little hopes for getting these back to normal. Some hurts just go... too deep.

The roads were pretty tough for us, though the wide shoulders gave plenty of room to feel safe. There were no major mountains, but continuous ups and downs as we rolled across the countryside. This was welcomed terrain for us after spending a few days in the flats along the Parana River, but it did challenge us considerably and we were beat (but satisfied) at the end of every day cycling. Along these roadways, the lush forest/jungle gave us plenty of scenery to behold when we weren’t huffing and puffing up climbs.

While there weren’t any big stories to come out of our time in Paraguay, the short section of road we were on and all the people we met brightened our spirits and helped get us excited for the crossing to Iguazu Falls. I might not go so far as to recommend you go out of your way to visit this less traveled country, but if you are nearby or especially cycle touring the region, it’s a place you should not be so quick to write off.

For the more nitty gritty details of the route and the border crossings, be sure to check out this post or our main South America cycling page.