As One Road Ends... (Adapting To The Road)

A great turning point occurred for our cycling adventure yesterday. After battling the pampas, a brutal headwind, and poor road conditions last week; we took a look at what lie ahead for the journey. In short: a lot of miles and waning time left before our flight out of BA in late April. Too many miles. Way too many. And not nearly enough time to cover them. 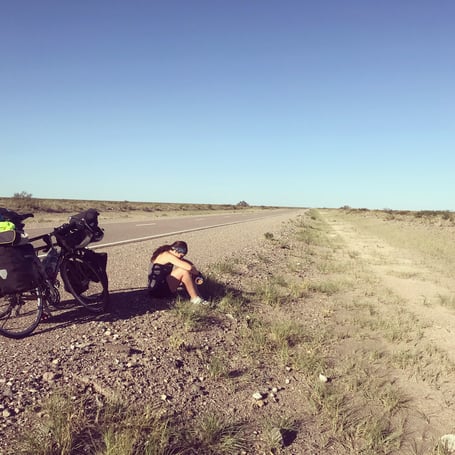 It turns out, Argentina is freaking massive. The span of pampas and desert between the few “big things” we wanted to see, mostly located in Salta, was just too much. I should stop using the world maps I drew when I was five to plan cycle tours. The scale is just…. terrible.

What’s more, Iguazú is too far away for us to reach without living in a pampas hell for 3-4 weeks. That’s just not what this trip is about. Sure, we are here to challenge ourselves and struggle to find those unseen places most people just drive past, but not for 1/3 of our time here.

This realization took hold after a difficult, but beautiful day, of climbing in the Callingasta valley above Mendoza. We’d heard amazing things about the scenery in this part of the Andes, and the reviews did not disappoint. On all sides we saw towering mountains of orange, red, and black. Behind us, the road fell away into the town of Upsallata where we began the days trek.

For the first time since starting the trip, there were rain clouds shielding the mountaintops as we peddled forward through a light mist. We kept a positive attitude for what lay ahead and were confident we could press on through the day. We even had “spirit animals” following us in the form of two dopey dogs, who stayed with us for 25 kilometers from town. These loyal companions would not give up in thinking we were their new owners. This broke my heart a bit, but their company was just what we needed to press up the climb. And don’t worry, we fed them and gave them water while heading up the road.

And then... the pavement ended. Here began the rippio with signs suggesting this would continue for 36 kilometers, all uphill, and serious rain clouds (one might even throw the ol’ “cumulonimbus” definition in there) on the horizon.

Argentine “rippio” is something Suzie and I were not prepared, nor wanted, to undertake on this trek. In many ways, this is the reason we failed to complete our tour here. Rippio is essentially a washboarded dirt and loose gravel road that, at least I believe, is not meant for anything other than mountain bike tires. It is the scourge of our type of cycle touring.

We tried (for a kilometer or less) to brave the conditions, but the constant slipping of back tires and shuttering of bike frames on the washboard defeated us in the end. It was (for us at least) a soul crushing experience to attempt climbing up under these conditions. We wanted to call ourselves “badasses” and grit through it. We wanted to show we could defeat this obstacle in our path. But, it was an insurmountable challenge.

There, we stopped. And turned around. The only option out was to go all the way back to Mendoza and around the mountains, over a 4-day ride from where we stood. With the dogs still encircling us and making us chuckle here and there, we did some quick math and realized we would need to fully replan to figure out what was now possible to cycle through in Argentina. Argentina we learned, is a place where rippio is more common than pavement or any other passaple surface where our tires are normally sufficient. This detour meant we were going to end up way behind schedule.

As if the universe were answering our questions of “what if we just pushed ahead a little longer?” a mere two minutes later, Marcela stopped to say hello. He’d been traveling by motorbike from Brazil and had come from the direction we meant to travel. After asking what the heck we were doing way up here in a bewildering fashion, he informed us that “the road gets worse, much, much worse.” He had fallen 6 times on the road that day and his tires were three times our size and prepared for such ruggedness. His windshield and side mirror were cracked wide open, his helmet had a few deep scrapes in them, and his bike in general looked like it’d been a prop in “Mad Max: Fury Road.” 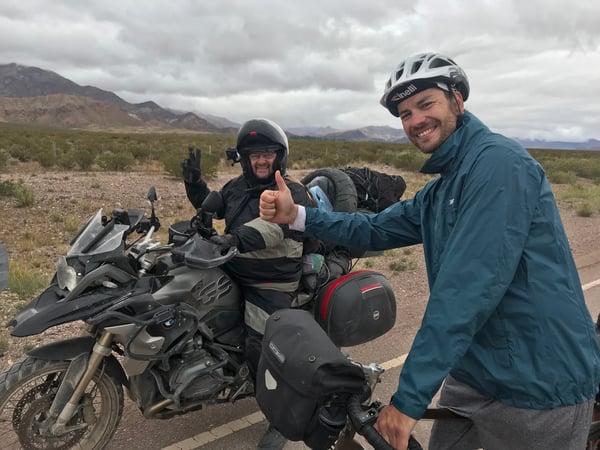 I felt like a bit of an idiot landing in this spot that day. It’s easy to look at maps, plot courses, add up miles, and calculate the number of days needed to get places. It’s easy to read a few cyclists accounts of roads and assume how you’ll respond. It’s also not like I haven’t done this before, mainly in Eastern and Western Europe and in the US. Argentina just beat me, plain and simple. The expanse between sights, pampas guarding these, unrelenting headwinds, and poor road conditions just do not suit our brand of cycle touring.

I should have known better.

Then again, it’s good to fail every once in a while… right? I mean, there’s got to be a lesson in here that I am learning and will one day reflect on behind stylish spectacles with a few deep words of wisdom. Today is just not that day.

From here, we will adapt our route and plan a new adventure. The trip is in no way off, but changed... all for the best.

Topics: Argentina, Musings From The Road, Challenges on the Road, South America Stories