We had a great time in Eugene walking around the town, drinking craft beer, eating deluxe donuts from Voodoo, and making two new friends, Jason and Emily. Eugene is the perfect place to spend a day off. If you stay downtown, anything you need is in walking distance, so you can truly spend the entire time off the bike (something our butts were particularly thankful for). Plus, a few miles down the road is McKenzie Pass, so if you are taking this route, it’ll be nice to have a rest before the long climb. 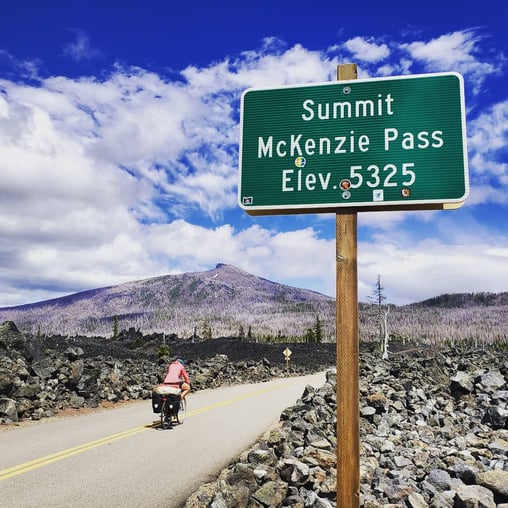 During the rest of the week, I fell in love with Oregon. My best way of describing this land is that it's like a video game set in the west: the landscape changes so dramatically and quickly that it feels like the transitions can't be real. One hour, we were in the mountains getting snowed on, the next, we were cruising alongside a river, set deep in a desert canyon. While the truck drivers can be annoying, the roads here have been incredible, and we've met amazing people along the way.

Yale Campground (Belknap, OR): No hiker/biker spots here, only RV and tent sites. We paid $32 for the night. Showers were hot and included. There were also electric outlets on site for us to charge up at. The place is right when you turn off the 126 onto the 242, so it was a good spot to rest up before the McKenzie Pass climb. We did a bunch of research on other places in the area, as there are several options that were cheaper. The main reason we chose Yale was that they were the only campground in the area with showers. There are a ton of other amenities too, such as a disk golf course, and you can use all the services at the nearby Belknap Resort, if you are up for a hike up the road.

Smith Rock State Park (Terrebonne, OR): The state website says they have hiker/biker, but we did not see it here. Tent sites are $8/pp. Showers are hot and included. The campground is used by a ton of climbers, which makes sense given the beautiful Smith Rock is close-by. When we were there, they were conducting a restoration effort of the grounds, so you should only camp gently in the designated zones. There aren’t stores that we found past Terrebonne, so stock up on supplies there first.

Mitchell City Park (Mitchell, OR): This park is right on the outskirts of Mitchell. It’s a small town, and the park is set up for people to camp at. Restrooms are across the street, though there are no showers (we used the hose connected to clean up for the night :)). It’s $12 per tent for a night. There is a grocery store and restaurant within a 5 minute walk up the road. Though it is right in town, this was a safe place to camp for the night.

Clyde Holiday State Recreation Site (Mount Vernon, OR): This campground comes out of nowhere when leaving the town of Mt. Vernon, and it’s a great place to spend the night or a few days. The hiker biker sites are $8/pp and there is a ton of space for people to use. Showers are hot and included. The town of Mount Vernon is only 2 miles away, so you can grab food there if you need it. The grass here was soft, and while there were a lot of mosquitoes at night, we really liked this place.

Bates State Park (Bates ,OR): Campground has hiker/biker for $8/pp. This is in the middle of nowhere, which gives it a more rustic and “roughing it” feel. The grounds are beautiful. There are two big areas for hikers and bikers to use, and we had 4 others camping with us the night we spent here. While there is running water from the spicket, there are no showers or flush toilets. Stock up on supplies in John Day before the climb, as there isn’t much else out here. The spaces were really nice: we camped on soft grass in flat sites.

Leaving Eugene, we took bike paths through the city until joining up with the 126. This is the main road we plan to be on for the journey across Oregon, so we plan on getting very familiar with this thoroughfare. The shoulders right out of town were pretty slim, and with lots of traffic (including big trucks and Rvs) it was sketchy for about 25 miles. After that, in the town of Blue River, the shoulder widened considerably. 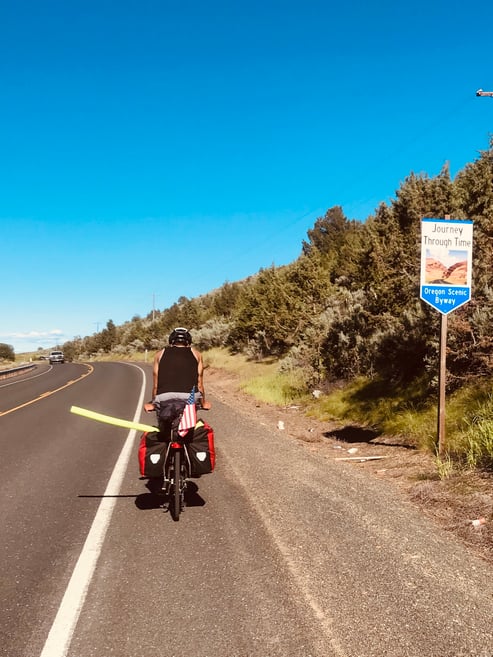 The 126 takes you into the gorgeous Cascade Mountain range. As it gradually inclines into the foothills, we were blown away by the views of the McKenzie River to our right. The river is nearly level with the road and there is only a narrow patch of trees separating it, so you get a great view of all the action. The water is crystal clear and is a wild shade of green and blue. As it quickly winds down from the mountains, the rapids and waterfalls along the way make it interesting to gawk at. Around one corner, this New Englander got to even cross a wide covered bridge, something that he could never pass up the opportunity to do.

We climbed up and over McKenzie Pass using the old Route 242. While closed to automobiles, we skirted around the "Road Closed" sign seven miles in to continue the climb up. This was one of the more beautiful roads I have cycled. While challenging, it's totally doable, and well worth the effort for the gorgeous scenery. Near the top, we entered a strange landscape filled with basalt rock and craters, presumably left over after the nearby Mt. Washington volcano exploded. Before descending, we took some time at the lookout post at the summit. Shortly after, it started to hail on us as we cruised down and into Sisters. 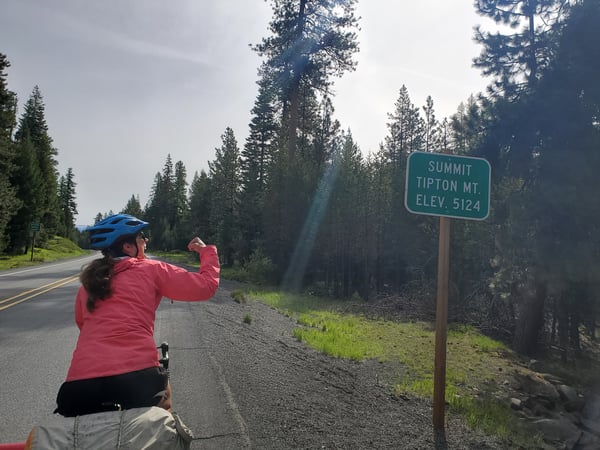 We followed the bike route after Sisters (a cute tourist town), and took a left to get off the 126 before Terrebonne. We then met up with the 370 into Pineville. From here, we rode the 26 east and up into the Ochoco National Forest. There were a few climbs here to contend with through the trees, but nothing major. After the small town of Mitchell, we had another climb to contend with, after which we had a beautiful downhill run through a gorge along Mountain Creek. This is the first time I really felt like we were in "The West," as we sped down into the John Day Canyon and looking out at the giant mountains in the distance.

We took a slight detour into John Day National Monument to see the Sheep's Rock formation. I wish we had more time to explore this park, as the rock formations are beautiful and we would have loved to see the Painted Hills. 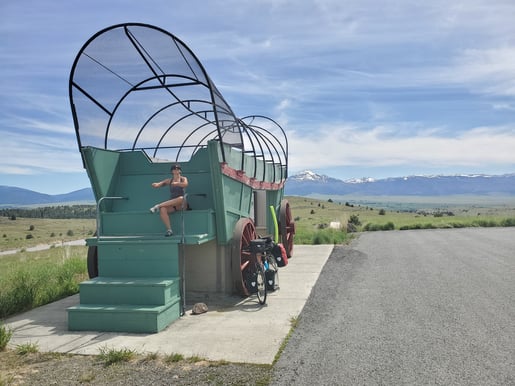 After this, we followed the 26 all the way into the small town of John Day. The road from here went back up into the hills, and we really felt the climb around Dixie Butte. The big upside of this climb was looking back to see the majestic snow capped Strawberry Mountain in the distance.

After descending into Austin, we had two more climbs through the forested hills before a long, steady downhill into Baker City. As we rode down, we took some time to have a picnic at Mason Dam, something I recommend if you are in the area.

That concluded another awesome week as we work our way across the country.

For more recaps on our travels across the US, check out our main page here: Biking Across the US.