This week, we made a 5-day run into Yellowstone National Park. By the time we reached our off day, we were absolutely shattered for all the climbing and distance that we covered. We got hailed on, caught in three wild thunderstorms high in the Rockies, saw a Moose, visited a few old mining towns, learned about a massive quake that hit the region, and made new friends everywhere along the way.

For all the difficulty of the week, it was one of the most beautiful parts of our entire ride. In my opinion, the ride up through Nevada and Virginia City and the descent into the Madison Valley might be my favorite 20 mile stretch of the entire trip. We are going to be sad to leave Montana as we press on into Wyoming on Tuesday. This state really wow-ed us, and I have a feeling we'll be making a trip back very soon to see more of its wonder.

Travelers Rest (Darby, MT): While technically an RV park, they welcome cycle tourists and have a soft patch of grass out back for people like us. It was $20 for the night and  showers were free, clean, and hot. Mary, the woman who checked us in, was delightful. We talked to her for 30 minutes before unpacking and she was so nice to us. She even have us soap and towels since it was our anniversary. Highly recommended!

Dillon KOA (Dillon, MT): We stayed at this KOA which was really clean right outside town. It was $28 for the night. Showers were included and hot, but they didn't have great pressure. Still, this was a good spot we'd recommend. The best part for us is that they had laundry here, which we were long overdue for. It was also right on a river and we got to watch a thunderstorm skate by in the distance.

Madison Valley Campground (Ennis, MT): It was $20 for us to spend the night. Showers were hot and included. The pros here are that it's really close to the cute town of Ennis and right on our route. The cons were, for us at least, we had to camp on the smallest patch of grass almost on top of our neighbors. They were really nice and we loved hanging with their family, but I feel like we got the smallest site possible.

We hopped onto the Bitterroot bike path out of Missoula. This was helpful to have with us for 45 miles into Hamilton, as traffic on the parallel 93 was insane. The only downside was that while it was raining, I got my 6th flat tire of the trip. While frustrating to fix in the rain, we repaired it without too much struggle and kept on trucking.

In Hamilton, we got caught in a thunderstorm and sought shelter at The Coffee Cup cafe. This was a cute little restaurant and we talked to a friendly couple there for a while about our trip before finishing the 18 miles into Darby. I really liked Darby. It has an old west vibe through the center of town and being the day before Independence day, the town was full of people having a good time.

From Darby we stayed on the 93 and started a long climb 22 mile up to Long Trail pass. As we got within 5 miles of the top, storm clouds started to encircle us. We got hailed on intermittently and fortunately reached a rest stop at the top before the real storm set in. We camped out for 2 hours to let the worst of it pass by.

It was only another 2 miles to the top of the Chief Joseph pass at 7241 feet and out first crossing of the Continental Divide. It was freezing at the top and the hail that had fallen earlier was still littering the road and forest. The ride down was amazing. We felt like we had the wilderness there to ourselves and even caught a glimpse of a moose running into the hills.

As we fell down into Big Hole the headwinds pickup up and didn't relent for 17 miles until we reached Wisdom. This was a tough end to the day. To add to our general level of tiredness and stress, we watched storm clouds approach far off in the distance. We luckily got into town before any rain reached us and also just in time before the only restaurant in time closed up for the night.

Out of Wisdom, the road gradually ascended across Big Hole towards Jackson. We got swarmed by mosquitoes along the way. Once we left Jackson, we started another climb to Big Hole pass. It was actually a really nice and picturesque with the Bitterroot Mountains in the distance and the feeling as through we were truly climbing out of a hole.

The downhill was over 10 miles long, but short-lived as we soon started a 7 mile climb back up. This was a tiring one and in the heat of the day, but we made it without too much pain. The downhill took us all the way into Dillon, about 17 miles from the pass.

From Dillon we followed along the 41 and into Twin Bridges. While slightly downhill, the road wasn't our favorite due to no shoulder and 70 MPH speed limits. Thankfully, we were here on a weekend and there weren't many trucks, otherwise this would have really been an issue.

We hooked up with the 287, following this all the way into Ennis. The route gradually ascended to Virginia and Nevada City. These old gold mining towns are really cool. It feels like you are in an old Western once you cross the town line, so don't miss this if you are nearby.

From Virginia City, it was a steep 7% grade for about 5 miles to the top of the pass. After that, it was all downhill to Ennis. The view of the Madison valley and Yellowstone in the far distance was one of the best of our entire trip as we made the fun ride down into town. 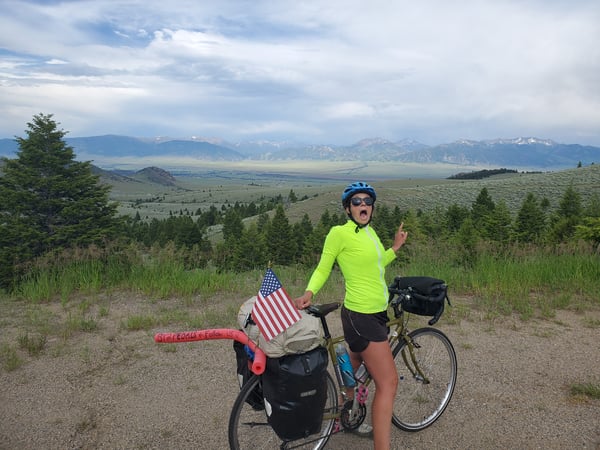 Leaving Ennis, we spent half the day riding along the Madison Range and south down the valley there. These were long stretches of slightly inclining roads under a massive sky. The ride is nice, but it's a mental game seeing the next hour to thirty minutes of biking always in front of you. While the mountains give you a bit t look at, it's all ranch land out here and there aren't many places to find supplies.

As we crept out of the valley, we started a brief climb back into the mountains. Here, we stopped often to read about a massive earthquake that struck in 1959. This was the second biggest quake in the Rockies ever and a bunch of campers were killed from a landslide that followed. It's eerie biking along the lake that formed, as dead treetops stick out of the water in the center.

After climbing to the banks of Hebgen Lake, it was a short 20 miles into West Yellowstone.  While uphill overall, the real challenge here was the relentless headwinds, which really slowed our progress into town.

That's it for this week! Next week, we are on to Yellowtone, Jackson Hole, and Grand Tetons! Check this out here on our US Cycling page.