Over The Andes: Climbing Paso Pehuenche From Chile to Argentina

I spent hours pouring over maps and reading other cyclists accounts of crossing the Andes mountain range leading up to our trip. I was both in awe and terrified of what lie ahead since Suzie and I had never climbed remotely close to what it takes to get over this giant mass of land. In reading other cyclists accounts, the beauty of the ride mostly superseded that of the challenge it took to get up in over, however I remained skeptical. After all, I would not necessarily call us hardcore cycle tourists. 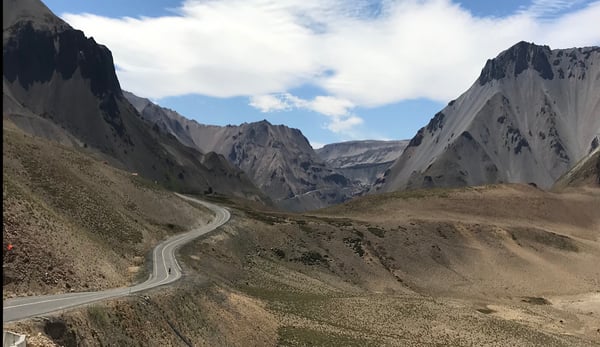 I know this may come as a shock to those who don’t pack 40 pounds of gear on their bike and go off into the woods for 9-months… but it’s true. Hardcore cyclists push their bikes way up into the Himalayas to get the perfect campsite. They ride almost exclusively on roads that aren’t paved. They only eat sugar and a few apples each day. If you don’t lock your doors at night… they steal your first born child.

We met one of these lovable lunatics after descending from our ride over the Andes. He was hopped up on adrenaline, eating a caramel packet the size of a softcover book, and was telling us about how he climbed over the range several times on loosely packed gravel roads. At a mile a minute, he spoke of loving the remote roads in Peru that went high up into canyons, then down, then up again. He also was carrying no technology at all… not even a stove to cook food! I’m still baffled by this. What was he doing… foraging and hunting?? I mean, good for this guy in doing what he loves, and it honestly sounds like he gets to see amazing things on those roads, but I am taking a hard pass (translated loosely into Spanish as: “Paso Duro”) on that style of riding.

For our ride, I focused on roads that are paved and any accounts of the road that other cyclists did not use the words “most challenging ride I have ever done,” in their description. Coupled with the general place we wanted to cross, I came across Paso Pehuenche (pronounced: pay-winch-ay). While still a mammoth climb at 8,376 feet, the accounts I read made it seem really beautiful on the way up and over into Argentina.

About a week before our climb, I learned that the lake at the top, Laguna del Maule, was both a lake and the top of a supervolcano. An active, supervolcano. An active supervolcano sitting atop “one of the most seismically and volcanically active subduction zones on the earth.” Deep down, I knew, just knew it was going to explode like Yellowstone did in the blockbuster smash hit “2012” while we were there. Who cares if it had not erupted in over 2,000 years, during our climb, it was definitely going to happen… and I don’t even have an RV to use as a form of escape. My escape vehicle was basically a Huffy strapped down with a bunch of camping gear. I’d never make it.

Paranoia aside, we began our long climb into the mountains a few days later in San Clemente, Chile. From there, it’s 100 miles to the top of the climb and the crossing into Argentina. When plugging this into Map My Ride, the classification for the climb is marked down as “hors catégorie,” meaning the climb is beyond categorization. Sitting here writing this days later, kinda makes me feel like a bad a$$ we accomplished this. The first day of the climb was absolutely amazing. After the days spent on the Ruta 5, we were so happy to be back on a road cut into the valley and winding along a gorgeous river. There was very little traffic to speak of, and when a car did pass, they gave us enough space where we felt comfortable riding side-by-side. In the distance, mountain tops grew ever closer. We were presented with a new set of peaks to look at with each bend in the road for those first 50 miles. Most incredibly, we were also gifted with a tailwind for the entire day. As a cyclist, I cannot begin to describe what a wonder it is to have a tailwind on the way up a big climb. The wind at your back both lifts your spirits and helps with every crank of the pedal as you push yourself forward. I’m likely not alone in thinking nature is always out to get me: it seems with every ride where wind is a factor, it’s a headwind. It’s always a headwind. But not this day.

The climbing was very gradual at first, and with this wind, we made great time cutting the climb down to 45 miles. As 4:00 hit, we ran into an area of the road that ended up being a big time decision. We were in great spirits, our legs felt strong, and we felt that we could likely finish tomorrow’s climb in just a few hours today. We also had nearly ran out of food, and without a tienda in sight, were tempted to push on in hopes that one may appear in due time. As we rounded our first corner, we came upon a busy parking lot. Getting closer, we saw that down a steep set of stairs and a suspension bridge over a fast-moving river, there was life! Tons of families were swimming in a natural pool, there was camping, cabanas, and even a store! Not wanting to push our luck any further, we instead pushed our bikes nervously down these step steps and made our way to the bustling natural area. We were greeted immediately by the camp administrator who spoke slowly but insisted that we only speak Spanish (we were in his country, after all). Suzie used her California high school spanish to get us a nice campsite (it even had a table--that’s what you call fancy living!), though he informed us that there were no food stores, and the kitchen--like all businesses in Chile--were closed from 4-8pm so we’d have to wait if we wanted to eat.

After a nice swim in the natural pool and getting quite hangry, Suzie proposed a new plan: beg for help from strangers. Again using her famous Spanish “skills” she asked many families that were leaving if they could spare any leftover food as we were cyclists who--like idiots--didn’t stop at the supermarcado on the way up. Two generous families and 30 minutes later, we had stockpiled the following:

Thanks to the generosity, or perhaps pity, of these families, we were able to survive on this food, not just for dinner (steak and potatoes felt like a feast to us!) but also for tomorrow’s lunch. Though ironically, that very night we found that the small tienda did sell eggs, pasta, and pasta sauce, so we felt incredibly guilty, though thankful, for needing to have these awkward conversations.

There’s nothing that makes you feel more like a homeless person than not having a home and needing to beg for food off the streets. Ah… this is the life. The second day was 20 miles straight up (including the pushing of our bikes back up the steep stairs leaving the riverside campsite). The tailwind was graciously still with us, but it did little to help with the steepness of the road as we pushed onward. Still, our spirits remained high but for the wonder around us. Pictures will do little justice to the beauty of the Andes and this ride. With each section of the climb, the massive Cerro Campanario (Bell Tower Mountain) poked out behind canyon walls and other, lesser, mountains into view.

Here, we ran into a group of four Brits cycling together and on their way down into Chile. They were plagued by the wind we were blessed with. It had been impeding their downhill progress all day, but they still had only positive things to say for what was ahead for us. The group advised we make camp at the Chilean side of the border, about 5 miles up the road, rather than attempt to complete the climb that day. We apparently still had a long way to go, and a lot of climbing ahead.

We decided to take this advice and finished the next few miles of the day strong. As food was again running uncomfortably low, we were head over heels to find an open cafe at the top, selling sandwiches and the like. Without a fresh vegetable or fruit for the last few days, we ate our fill of avocado-meat sammies and drank nearly every beverage they sold. The owner and his daughter again showed us the generosity of the Chilean people. They pointed us to a spot down near the river where we could camp without being bothered. They also offered to have us use their facilities at any time for any reason, including cleaning up or just to sit inside to get out of the cold (it was windy on the top!). We graciously accepted their help. Our campsite was beautiful, the punk rock shower in the bathroom with baby wipes was just what we needed, and a hot dinner was one of the most delicious and needed food of the trip. 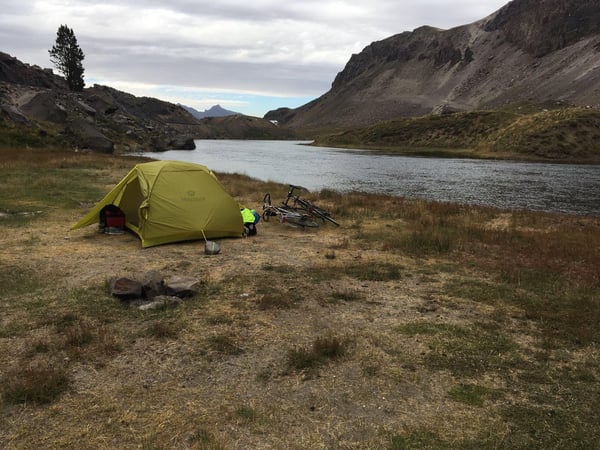 That evening, we also laughed along with the store owner's daughter while watching “The Adam’s Family” in Spanish. Suzie loves this movie, so I don’t want to bash on it in any way, but my 70% Rotten Tomatoes score for the English version was raised up 5 points for watching in Spanish. There’s something about a spicy Uncle Fester that just comes through better in dubbed Espanol.

We awoke the next morning, that final day of the climb, excited to reach our goal. After packing up camp, we said our farewells to the cafe owners, hung out with a wild fox for a bit, fixed a flat tire on my bike, and passed through border control in Chile.

The journey around Laguna del Maule was the most beautiful of the climb. All around were picturesque, sandy mountains. The sweeping colors mixed with the deep blue of the complimenting lake meant we stopped and stopped to snap picture after picture. It was indeed the most beautiful ride we had ever experienced. For the next 15 miles we climbed through this landscape, and were greeted by more and more scenic vistas. Words can’t describe its beauty, so I’ll let the pictures do the talking. When we reached Paso Pehuenche we were a bit confused as the monument wasn’t, well, as monumental as we’d hoped. Still we stood on both sides of the Chile/Argentina border at once, said a big goodbye to Chile, which surpassed every expectation we had, and continued our journey into country number two.

The ride down quickly turned into a landscape much different than the Chilean side. Where as Chile had greenery and trees, Argentina’s side was a beautiful but austere landscape of the high desert and small shrubs. The ride down was vast, empty, and incredibly rewarding considering up had been our path for the last half-week. We reached the border at the bottom and were greeted by van loads of mountain bike tourists. They applauded us as we rode in, gave us thumbs-ups and high fives, and insisted we take a picture, impressed by our feat. It was the best way we could have ended our ride. 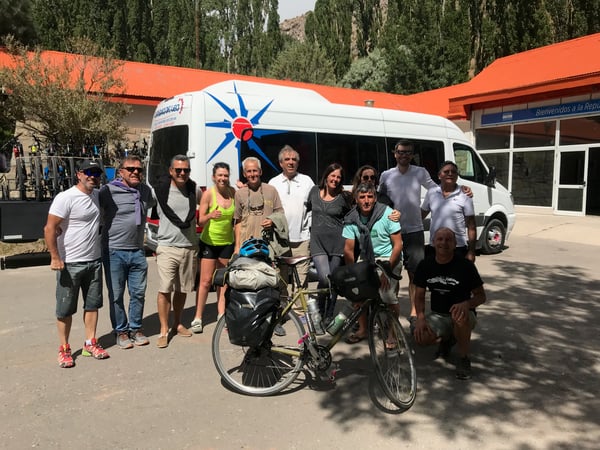 The climb into the Andes thus ended, and we entered the Argentinean desert with the mountains in our rear-view mirror. We feel so accomplished and proud of ourselves for making it over the pass, and incredibly grateful that it was so scenic for the entire ride.

You can read more about our journey to the Andes and where we are off to next here.