People Like Us: The Good Folks We've Met On The Road [Part I - Coastal Buddies]

It dawned on Suzie and I that we have met a ton of great people on this journey. Like, really great, inspirational, amazing, knock your socks off funny, story filled, never want to part ways with them but have to -- people. While we have been alluding to them in our Instagram and blog posts, we want to better track our experiences with people like us on the road.

To expose these warriors of the road, we’ll have a series of posts for each region we’ve passed through. The first, below, is focused on our ride up the PCH (Pacific Coast Highway) and Oregon Coastal Highway. Hope you enjoy! 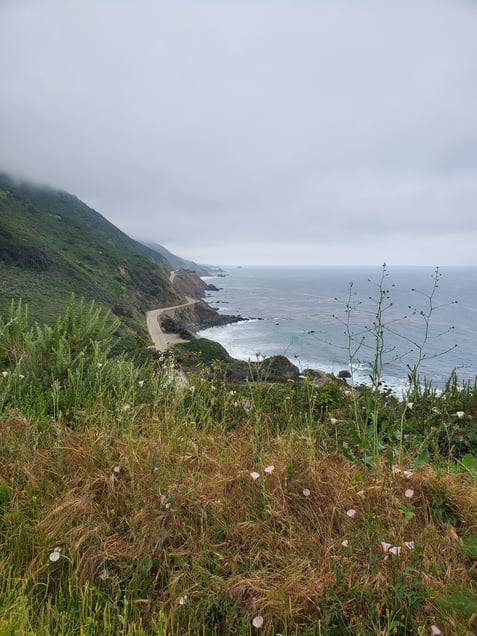 This guy is the stuff of legend. When we pulled into Plasket State Park in Big Sur, we lamented for not grabbing beer before arriving. The nearest town was five miles uphill, and we were beat after a long day on the road. As the sun set over the Pacific, we made a fire and settled on calling it an early night while pounding water. Out of the darkness (I swear it was as if he came from the forest), Buck emerged and approached our fire, politely asking if we’d like to share in the 12 pack of PBR he was carrying. It was as if he were a guardian angel who knew we needed a few beers to close out the day, and thus he materialized to make our dreams come true. Buck is a super nice guy who saw us earlier in the day riding and figured we would be camped at this particular hiker biker spot. He’d done a few long cycle tours himself, and we swapped stories while sipping on the delicious PBR. He even offered to host us in San Jose if we needed a place to do laundry down the trail. Buck, if you ever see this… you sir, are the man. 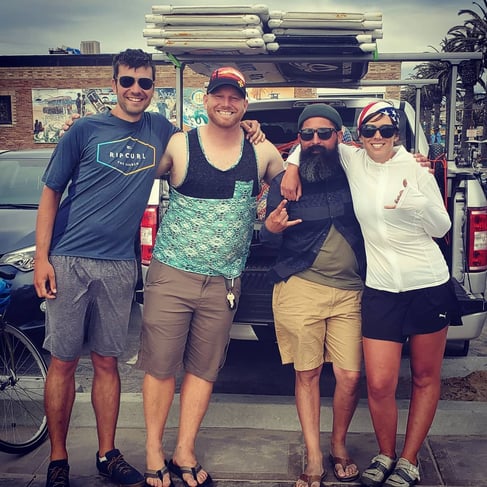 These two gave us a great intro to LA life for a few days. As we were biking through Redondo Beach, they stopped us with the offer of a free beer to drink on the back of their pickup. While initially declining, once we told them that we were biking across the country, they insisted we take 5 (which turned into an hour) to chat with them. Tyler had actually done a similar trip, completing it even after needing to get an appendectomy in Denver, ⅔ of the way through. Bad-ass! We laughed a lot hanging with these two and joining in as they harassed people jokingly on the boardwalk. It was Cinco de Mayo, so we really would have missed out had we not stopped to hang here. In the end, they gave us a few free shirts to wear (which we use as camp shirts) and wished us well on our travels. 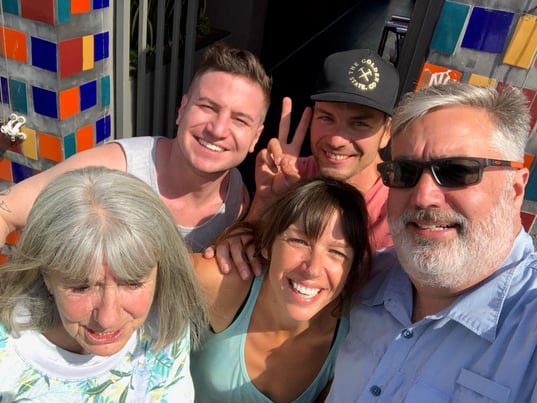 Only so much can actually be shared about our night out with this gang. Suzie and I wanted to just get a beer and a taco out before returning to the hotel to get chores done. Instead, we had round after round of drinks purchased for us as we built a fast track friendship with everyone else seated at the bar. From learning about Steve’s fight with Flaming Lips lead singer Wayne Coyne, to hearing Judy recount her time at Woodstock (the real one, not… Woodstock’99), we hung with the Santa Monica Rebels deep into the night. Everyone was in shock regarding the plans for our adventures, and we likely retold our route and where we’d already traveled 10 times before the night ended. 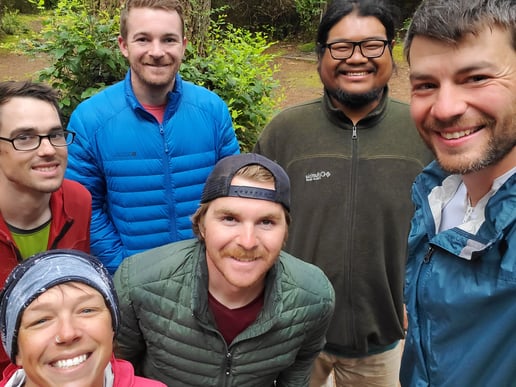 Dan and the Funky Bunch

As we rolled into camp near Florence, OR, Dan followed us in and introduced himself to us. This Stockton native was on a two-month cycling trip down the PCH and then back up through the center of Cali. Following Dan came another group of three, two brothers from Jersey and a Texan. I fee awful for forgetting their names now, but we all bonded immediately and started spilling the details of our respective adventures. We all chatted deep into the night, sipping on wine, beer and Fadorade (Gatorade mixed with vodka) and just chilling by the fire. These were the first college grads we met on the trip, who were spending their summer celebrating not in the typical style, but taking off on a multi-week trip cycling with friends. We’d meet several more like them down the line, and I think this is such a cool way to bridge the gap between school and work. Dan also now holds the honor of one of my “Top Moments of Our Cycle Tour,” which you’ll have to wait for a later date to hear more about. 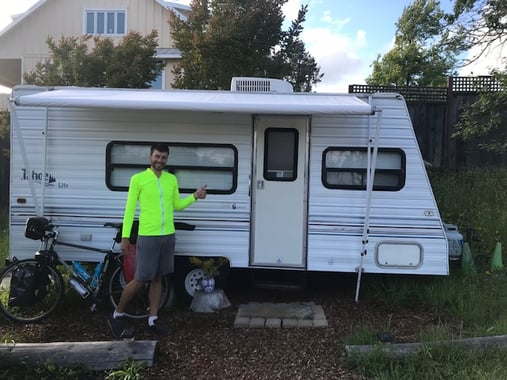 There are just too many of these people to write in separately, so I’d like to instead group them together. Over the course of our ride up the PCH, we met several (like… more than ten) older couples that invited us to eat with them, gave us food, asked us to stay with them down the line. All of them were so incredibly nice and we felt fortunate to be offered places to stay as we made our way up the road. Whether is was a full fledged dinner and a free camp site next to their RV, an offer to stay for several days in their kids rooms, or a kindly bottle of wine offered up… we felt spoiled by all our RV-parents on this trip.

Derek works for the city of San Luis Obispo (SLO). He met up with us while cycling outside Morro Bay. Thankfully, he immediately let us know about a better way to cycle in the area and led us off the busy 1 and over a beautiful climb nearby. We cycled with him for about an hour as he told us about all the awesome bike work he was doing in SLO and that he actually planned a lot of the bike routes in Santa Barbara. We grabbed food together in town and swapped cycling war stories before going our separate ways. 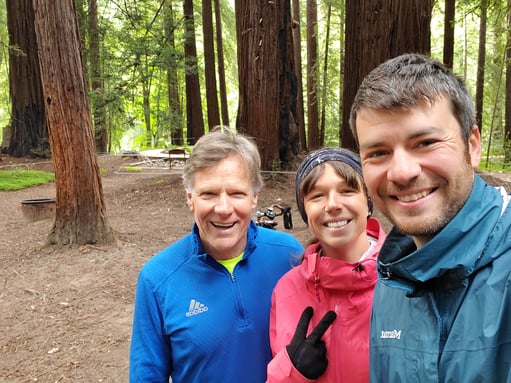 We met Kim while camped out in Big Sur at Pfeiffer State Park. This was the coolest campground while riding the PCH northward, as our site was located smack in the middle of a redwood grove. Kim hung out with us for the night while we ate, drank wine, and had a fire together. He was riding south (like everyone else we met) on a 4 week trip on the coast, and had done a bunch of rides leading up to this. He was just an all around good dude who was easy and fun to talk to through the evening.