Reflections On A Day In Uruguay

“Why does every foreigner we meet on the road refuse to smile in pictures?” I wonder aloud. Ski is preoccupied with his own thoughts, frowning slightly as he types furiously with two thumbs, iPhone directly in front of his face.

“I mean he looks, well, downright unhappy. Maybe bewildered is the right word? Why would he want to flip through pages of his life in 20 years and think ‘I sure wasn’t sure about anything back then’ or ‘this life has been pretty dismal hasn’t it?’” Ski shrugs again. 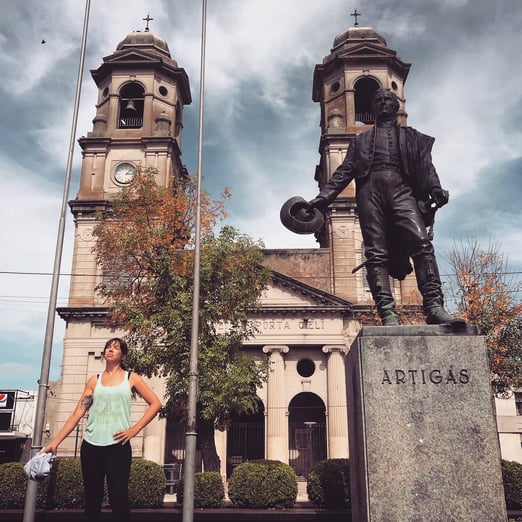 He’s not really listening but I don’t need him too. I’m happy to ramble aloud without an audience though I am genuinely curious, why don’t they choose to smile? I’m looking at a picture of us with an Argentinian man whose campsite we stayed in a month or two back. He’s more grimacing than smiling and his eyes are wide, as in shock, while his brow is tilted inward like he’s been told bad news. The combination is nothing short of disastrous, a collection of expressions that explicitly contradicts each other. Why is this the face he chooses to cement in time?

I stare at the picture longer, then shrug as well. Whelp. So be it.

We’re sitting at breakfast in a hotel that is out of our budget, way too expensive for
the hardcore rugged bicycle trip we promised ourselves. I’m slightly hungover. Besides wine, we splurged on food last night too. We hit a hot deli at the first legit grocery store we’ve seen in months and since the Deep South of South America only serves variations of sandwiches and French fries, we are overwhelmed by the prospect of grilled chicken, salad, bruschetta and wine. It’s a luxury. We plopped down on our king size bed, crisp sheets wrapped around every inch of newly showered skin, fistfuls of food and bottles of empty wine bottles strewn about while a bad 90s action movie plays in the foreground. Now this is the life.

At breakfast I remember last night and reflect on it ironically. That’s what regular life is like back in our Boston apartment. Salad and chicken and some Pacino on the tube. But after four days campsites, cold dinners, and peanuts force-fed as fuel rather than food, an abundance of healthy eating options and a clean bed feel like amenities again.

The WiFi didn’t work in our room which drives Ski insane. “What a lunatic,” I thought. “Can’t he just be grateful we’re eating an actual vegetable?” He’s wandering around the room, phone in one hand and laptop in the other, outstretching arms one at a time, like arms of a car factory, vigorously grabbing at pieces of metal to assemble a car the way only a robot could. He’s checking for a signal on either to no avail. “I think we should switch rooms” he manages to sigh and grumble at the same time. “We paid good money for this WiFi.” I look around the room and the food I’ve laid out that fills every inch of the hotel coffee table. There’s even salsa poured into a camp pot and wine and water poured into four glasses. “Are you serious,” I wonder to myself. “We paid for the WiFi?” Besides the spread of what any family of four would label a feast, there’s camping gear strewn about any empty space or tall object that can work as a hanger. Our balcony is dripping with hand washed laundry including men’s boxers and women’s underwear. “We paid for silencing the employees of this hotel not to shame us for turning their four star establishment into a favela street corner.” I say nothing of this aloud including agreeing with his plea to move, knowing that my silence will help guide him down the path of coming to his senses. He does and we settle for an action movie on TV actually in English, undubbed, which is to say, exactly what we would have chosen had WiFi connected. 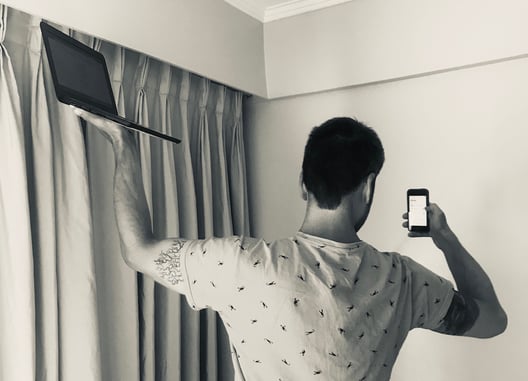 Things like internet connection are another thing we’ve learned and labeled as an amenity. Every time Ski is doing his dance to find a single bar I remember the first time my family got AOL back in the early 90s. My parents, my mom especially, were and always have been resistant to change. When cordless phones came out the world rejoiced, happy that a two-foot radius would no longer restrict their circumference of conversation, like a dog tied to a pole, barking and running in circles as trucks race by as if showing it the limit of its mobility. My mom waved her hands at our suggestion to make the change to be unleashed, saying rather annoyed, “What a waste of time and money, we’ve gotten along fine without it. It’ll pass, this cordless phone, it’s just a phase. The world will get over it.” We still had a rotary phone. As an elementary schooler, overwhelmed with excitement to dial a friend, I’d hit the wrong number five digits in and think Christ!, hang up, start to redial and ultimately mess up once more. “Do you understand the time saved with a cordless?”, we would plead with her. “It has buttons!” We pleaded. “Like real push buttons!” She would wave her hands again, “Work of the devil,” she suggests. Other things she labeled the devil were coffee (“who needs it, it’s just another addiction” she would offer) and carpet, because it was a pain to clean and cleaning wasn’t something she was often seen doing. That chore she left to her litter of four children.

When we finally did get internet it was because AOL has sent us so many CDs that I think my parents felt that they’d rather cave to technological advancement than continue to see waste piling up. It was a hard compromise for them to agree to, but CDs were expensive back them so one day they groaned and put that CD into the ROM-drive and bam! so we entered into the online world.

When the internet first came out it competed with the phone line. In a rush to dial a friend for after school plans we’d pick up the phone only to hear Bee-Boo!-Bee-Boo!-Wawawa! We’d slam down the receiver but it was too late. Seconds later came dad: “Son of a bitch! Who picked up the goddamn phone!” We’d hurry into our rooms like mice when the light suddenly gets clicked on. We’d never tattle though dad never really asked a second time.

As Ski grumbles under his breath still struggling for service, I think back to those days and wonder, “Is this how the whole of South America lives now? With the uncertainty of connection? God that must be awful. I wonder if a kid gets on his devise anxious to chat with a school friend and then hears his dad: “Son of a bitch! Who got on and kicked me off!" And then they silently log off and sink into the shadows like we used to do.

Yes, solid WiFi is a luxury indeed. As is a clean, comfortable bed. And a healthy dinner. And a hot shower.

We’ve been in South America for two and a half months now and we’re ready to leave. As millennials, we yearn for signals and amenities. The thought of campsites with Friday night movie nights, charging stations and bathrooms with toilet paper are calling us home. As is the ability for Ski to talk to strangers in a language he can speak and having cell phone service to check on our family more regularly than once a week. Lastly, and maybe most importantly, I’d like for strangers we’d meet to actually make a smile in a picture. Because when we look back in our trip in twenty years we don’t want a stranger's bewilderment to spoil what we remember as a great adventure.