I’d never heard of Hells Canyon prior to arriving in Baker City last week. As soon as I saw the sign for it I needed to find a way to bike there. I mean… how mysteriously eerie does “Hells Canyon,” sound? How did it get its name? Is it hot there? Is it deep enough to peak into actual hell? Do they serve good cocktails? There at least has to be a casino, right? I couldn’t pass up a chance to find out.

Surprisingly enough, Hells Canyon is in fact the deepest river gorge in North America, not the Grand Canyon which I and many others might have assumed. It was carved by the Snake River, which of course any child of the 90’s knows, is where that famous floppy-disk game “Oregon Trail” ends. And it creates the border between Idaho and Oregon. Most of the area around Hells Canyon is inaccessible by paved roads and sadly, there casinos and cocktails are not included. 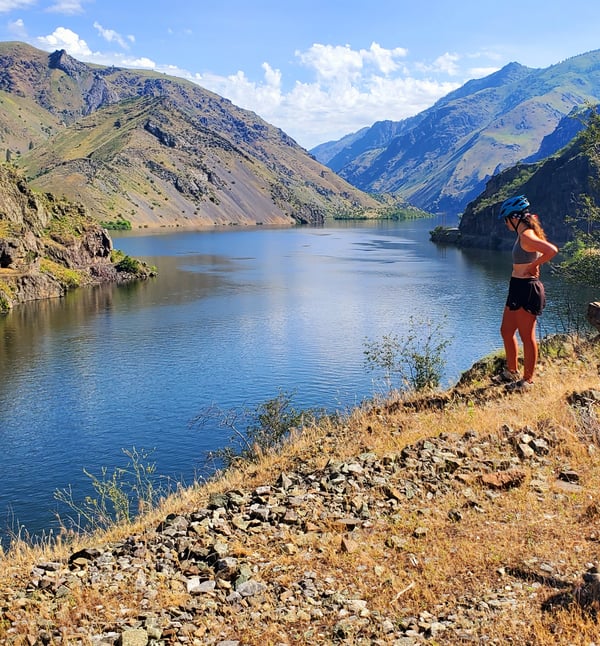 As we researched potential routes through the area there appeared two options. First, ride up and back along the Snake River. Second, do a 5,500 foot climb up to look at the canyon from above. Considering we’ve already climbed a cool 200,000 feet on our trip so far, we opted for the view from the canyon floor.

As we started our early ride up the Snake River, we began to realize that there’s a tough part: from the bottom, it’s hard to know when you’ve actually seen-seen the canyon. Winding through as the miles ticked on, we never reached a point where we were floored in our tracks by the beauty. We continued to hope that we’d be greeted by this sight around the “next” corner, but it just never came. After 12+ miles and seeing my Reese’s Cups melt into a thick liquid as the temperature rose, we decided that the moment would never come and we cut our losses and turned around. 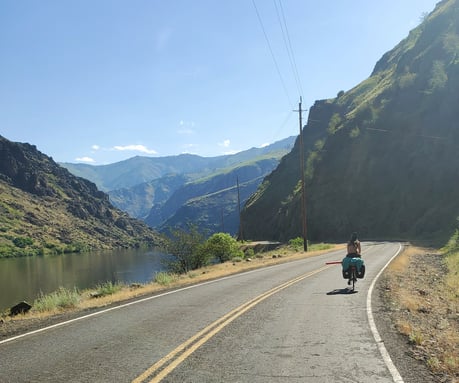 But then we remembered that hope was not lost--there was still option two, waiting just thirty miles uphill in the other direction. Determined not to let Hells Canyon beat us, we refilled our water bottles and started the climb to the overlook. Heck, if we couldn’t see its majesty from the bottom, we might as well try to see it from the top.

Almost exactly twelve miles into our climb, we heard a loud explosion and saw a flash of light. Cresting another steep incline, a bolt of lightning shot across the darkening sky ahead, followed by a dull, but increasingly sharp rumble of thunder. Surely after all we’d gone through during this day we wouldn’t need to turn or seek shelter in the forest? The storm would pass… it would have to pass, or else we’d be adding another day to our effort to escape this place….. Undeterred, we continued to cycle into the lightning storm until we managed to flag down a car and know what lay ahead of us. The weather report? Massive thunder/lightning storm with heavy showers, just five miles up ahead. 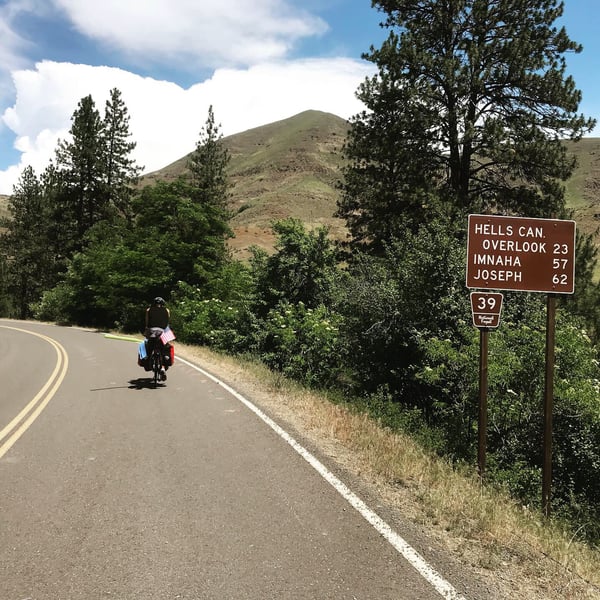 By the end of the day we had managed to cycle 64 miles and end up exactly nowhere. In spirits as low as the canyon floor, we refilled our water bottles for the third time at the exact same campsite we had set out from just eight hours before and took a low speed 16 mile death march to a campsite anywhere but here and anywhere in the name of progress.

Hey, not all days are good days. Just like bad days at work or at home we had a bad day cycling. It was a lot of work for nothing, it was hotter than hot, and spirits were dismal. But the next day was better, and the next day better than that. And writing this now, it makes me happy to know that we still got to be in the deepest river gorge in North America, even if it did look a whole lot like nothing.

Topics: Musings From The Road, USA, Excursions, Challenges on the Road, US Stories