I labeled this week's recap as "traveling" rather than "cycling," since most of the miles were spent on two very long bus rides. It feels a bit like cheating to hop a bus to me, but something I have gotten over relatively fast. The alternative would be to kill ourselves and cycle over 1,000 miles across a barren landscape, only to miss the main reason we chose to cycle Argentina in the first place: Iguazu Falls. 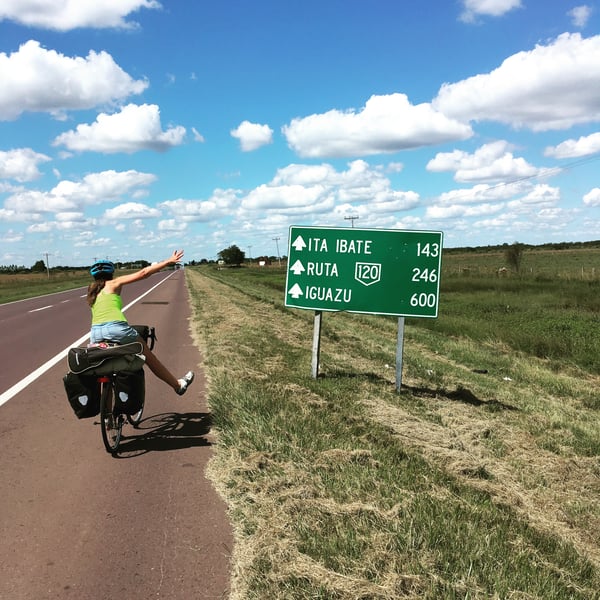 While this week I may not be able to claim the label of "hard core cycle tourist," I rest easy looking out at a gorgeous sunset over the Parana River tonight rather than the single tumbleweed that rolls across a lifeless plain. In fact, with our luck in the Pampas, there'd have been a headwind to blow the tumbleweed right at me. It would have probably ravaged our campsite, igniting the flame of our MSR stove and pass it over to our tent, and then with a final farewell... it would have found a way to puncture my back tire before blowing out into the nothingness of the night. Kind of a "glass half empty" way of thinking, I know... but at the same time... did it make you chuckle just a little, maybe?

We began this week on a bus from Mendoza to Cordoba. We were very nervous about the prospect of being able to get our bikes onto a bus in Argentina, as we have read a bunch of accounts online of how this can be a hassle. Suzie is going to write up a more detailed article about this experience soon, so stay tuned :) . Long story short though, we were able to make it work with little issues and safely boarded with our bikes on board.

We took an extra day off once we got to Cordoba to actually experience the city before heading further north. It turned out to be the best call we could have made. Not only was it good to feel like tourists and that we were learning about the city more than we normally would have, but Cordoba served as a true "reset" for our trip. It helped that the owners of our hostel (Mediterranean Hostel Cordoba) were super friendly. We spent the day walking around town, eating some of the best BBQ chicken we have ever had, and straight up chillen in the hostel.

The following evening, we went back to the bus station and hopped onto our night bus to Resistencia. This 12 hour bus ride was, as they say, deluxe. The seats were super comfy, they reclined back into beds, and we even got a free meal. We scored seats in the very front of our double-decker, meaning we could see for 180 degrees in all directions. This seemed amazing, until we realized that our driver was a maniac on the road. I truly believe he found a way to hook up an XBox controller to the steering wheel and was reveling in his last game of Grand Theft Auto III. Terrifying all around.

After 22 hours of bus rides, we arrived in Resistencia in the early morning hours. We reassembled our bikes in the station, snagged a quick breakfast, and were back on the road again.

Resistencia is a mid-sized city on the Parana River in northern Argentina. I'm told there are a ton of sculptures there to check out, but being that is the only thing I heard, I didn't loose sleep in not exploring the claim further. I mean, best case scenario.. what, you see a few sculptures? Worse case, you take the time to try and see a sculpture and it's not even there? Paso Duro (for those not paying attention to previous posts, the translation is: "hard pass.").

We stuck to the edge of town to avoid the traffic as much as possible. This eventually landed us at the town dump, which is more of a 2-mile stretch of road where people throw their trash than an actual dedicated spot, and maneuvering sandy roads for a couple miles before rejoining the main road.

There was a 2-mile bridge on our path to Corrientes, which was pretty terrifying. This is the only crossing for the busy Route 12 over the river between these cities, so there is a ton of truck and bus traffic across. As we pondered crossing on the road vs the sidewalk, a motorbike crashed right in front of us (I think he rear ended a car?), basically making the decision for us as we jumped onto the walkway. For those curious, the couple who crashed were okay, save a bloody finger and a few scratches. The driver of the car was fine.

It was white-knuckled biking the whole way across the bridge as we slowly navigated around suspension cables and small holes in the sidewalk. While nerve racking, the view from the top was spectacular.

We ducked into Corrientes to see what was going on rather than stick to the coastal road. Here, we ran into a protest in the city center, which did mean a few roads were clear for us to bike without traffic :). After lunch at a Shell station, we rejoined the route 12 and kept on pedaling east. While relatively flat, this part of the country is incredibly green, a welcomed break from the brown and grey we were used to further south. From Corrientes to our camp site, we loved the road since there was a wide shoulder to shield us from traffic.

We pulled off the road at Ramada Paso and found camping at a municipal/eco-park off that was well maintained and only costed 2 dollars for the night. This was one of the most comfortable nights camping in a while. We had soft grass, the entire place to ourselves, and clear skies for star gazing. While mosquitoes harassed us constantly, this was a small price to pay for a great night. The next day, we lost our shoulder, which was a huge bummer. There was absolutely nothing between Ramada Paso and Ita-iban, our next destination, so we stocked up on food and water in town, put on our headphones, and started to grind through the day.

15 miles from town, I reached my breaking point with the drivers here. It sucks that cars and trucks don’t give much space on these roads. It sucks there isn’t much shoulder to hang onto for dear life. But those things you just learn to deal with. Buses on the other hand, are an entirely different story. As our lane was empty for a few minutes, we were enjoying some time not holding the handlebars for dear life in our lane. One hundred yards ahead, a double-decker bus decided we didn’t count as traffic and started to pass a small sedan. We frantically waved our arms to have him abort this maneuver, to no avail. In fact, a second bus following the first also entered the lane to make the same move!! I yelled to get off the road at Suze, and we hit the grass in time to stop, show a choice finger to the drivers, and yell out in disgust. What gets me, what really gets me here, is that the bus drivers were laughing as they passed by.

I understand that bikers are less common on these roads. I get that drivers are used to driving for long periods of time on long flat roads and we are less visible than a car. But have a least some respect for human life. I’ve cycled in a ton of other, some far less developed, countries in my day. In my opinion these have been the most dangerous drivers to deal with. I won't rant any more on this note... but Argentinean bus drivers could learn thing or two from what they do in Brazil to be safer on the road. I'll also throw in a double footnote and recognize not ALL bus drivers treat us like this, and it's the sins of the few that pushed me over the edge of madness.

This really ticked me off, but we put smiles back on, told ourselves to be positive, and got back on the road. After all, this is something totally out of my control. If I told these feelings to Gandalf, I know he'd let me know that all people feel angry when pressed with such awful bus drivers in Argentina, but that is not for us to decide, all we can decide is what to do with the time that is given to us. I feel better already.

With storm warnings in the region, we made the call to hold in Ita-Ibate for two nights and wait out the weather before heading to Paraguay. We've been here for two days now, and though this "storm," has yet to appear, it's been a nice few days off to hang around the small Argentinean village.