Taking Bikes on Buses in Argentina

Recently, we needed to incorporate two long bus rides into our trip plan so we could be sure to hit Iguazu Falls, a monumental natural beaut in Argentina. The bus rides were necessary because this park is unfortunately surrounded by desolate landscapes that would take weeks to bike through on either end. Overwhelmed by research of Iguazu's beauty, we forgot one very important detail: can you even put a bike on a bus in Argentina?

Once we crossed over the Andes we began looking more into this crucial item only to be flabbergasted to find that, in fact: it's very difficult; most cyclists found it nearly impossible to do so 😱. There is even an account of one man who waited and begged at a bus station for six long days with no luck of getting his bike on a bus before deciding to, screw it!, sell his bike and take a flight to his next destination. Talk about a trip ruiner!

Seeing how I can usually talk my way into nearly anything, I decided that no, that would not be our fate. Not only because I can lay the charm on thick (I did have a career in sales once upon a time) but also because I have a deep and profound attachment to my bike, Tink, as she has been with me through thick and thin. Together we’ve completed over 5,000 miles of cycling, and when I had my notorious 45-mile/hour crash back in the Balkans in 2012, she rode away with just a single scratch. No no, my baby girl was not being sold like Chiclets gum at the Mexican border. I wouldn’t do that to her, not after all she’s done for me.

So upon arriving at the Mendoza bus station I had on my prettiest face, my Spanish vocab memorized, and even wrapped my wrist in an AC bandage... my spare shoot in case I would need to call upon the pity vote as a last stand. Judge me if you will, but Iguazu was named one of the Seven Wonders of the Natural World and Tink and I had plans to ride gloriously into that sunset.

I entered the San Juan Mar Del Plata Bus Company Kiosk and began my slow and pathetic Spanish, explaining our need and destination. I didn’t mention my hand but I would be lying if I say I had that puppy tucked high and tight, close to my body and clear above the view of the counter top. ¡No problema!, said the helpful employee, noting in Spanish, We do bikes all the time. My internal jaw dropped. This was too easy. Keep it together, Heibel, I told myself. I knew I was charming but... this charming? In my experience things are never this easy. Something had to go wrong, and quickly.

As it turns out, all this outfit planning and fake injury were for nothing. Maybe a few cyclists had bad experiences and chose to write about them or maybe Argentina has changed since those articles were published. Either way, let me explain why taking your bike on a bus in Argentina from a big city terminal isn’t too difficult at all.

First, some (though not all—so do your freakin' research!!) have a shipping company as well as a bus company. It appears as though private bus lines are used as much for shipping packages as they are for shipping passengers across country. People come to the bus station to ship packages and these packages get shipped on the same buses taken by passengers.

The San Juan bus employee pointed to the room directly behind him where Marcus and Miguel could help us get our bikes on the bus. ¡No problema!, he again assured me. Though the smile on his face and the excessive pointing to the two men, Miguel and Marcus now staring at me like... why is this girl still standing there when we have some bikes to ship... made me want to hand over my money, I was still not sure. When I explained I was muy nerviosa because Google assured me that bikes were not amenable (no I did not know the word amenable in Spanish... I probably just said “no bueno” a bunch) to Argentinian buses, he again pointed. He told me to go around the back and that all would be ok. His insistence made me trust him, though when I hesitantly asked Ski for the money bag, he held it tight to the chest, eyes wild, unsure if my Spanish was correct. He too wondered if we would soon suffer the fate of another story we read, where a woman bought a ticket first with assurance, only to be told by the bus driver soon after that her bike was not permitted and no, she was not getting a refund for her ticket.

Trusting the three men now all staring at me like I was a cat caught with my head in a Kleenex box, I handed over my credit card and bought our tickets. Then we started wheeling our bikes nervously to the shipping company on the other side and I began to wonder, What would the other side look like? Would it be dark there? Would the dark Miguel and Marcus appear in masks and capes like a gaucho Waluigi and laugh and say: Banana Peel! No bikes allowed today! Mehehehe!

Luckily, Waluigi did not appear and Miguel and Marcus looked the same. Heck, it was even sunny outside. To ship our bikes they provided us with broken down boxes, some packing tape, and string. Marcus told us how they wanted it wrapped and let us get dirty and weird right outside the shop. Each company has their own standards so consider this a hostage situation: pay close attention, do just as they tell you, and no harm will come to you or your loved one. 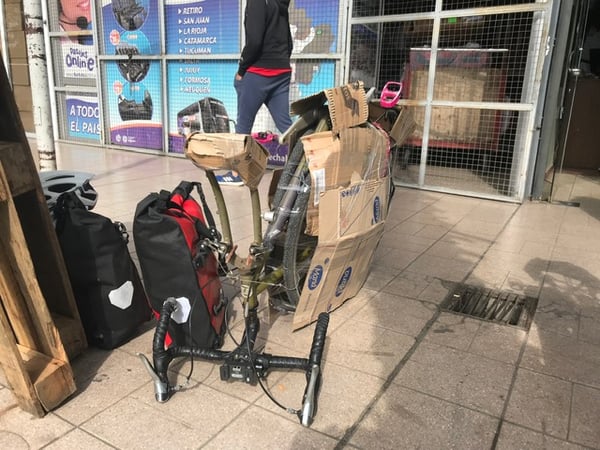 More specifically, San Juan Bus Co. required us to take our wheels off, tie them to the frame, then use the cardboard to protect the wheels and whatever else we wanted protected. Then? Just tape the crap out of it. Seeing how I once made an entire bike box out of 20 at-home coffee maker boxes, this was no challenge at all. Outside, other customers clamored by and curiously watched the gringos work. Bike chain oil on our hands and faces, we taped flattened boxes over our derailer and wheels, just lift-and-tape-and-lift-and-tape, until they looked—as my dad would say: close enough for government work. Once we wrapped them up, we paid $800 ARG Pesos (~$20 USD) told them what bus we’d be taking to Cordoba, and done! Bikes were safe and sound and ready to go.

As another FYI, buses have baggage rules as well, so we also bought large, cheap duffel bags (also about $20 USD for both) to put our gear in under the bus. Anything that didn’t fit we shoved into a pannier as a carry on and viola!

10 hours later we arrived in Cordoba, bikes in great shape and on our actual bus. We had read another account of someone who shipped their bike, but it got there 6 days later. Regardless to say, same day arrival was a huge relief! 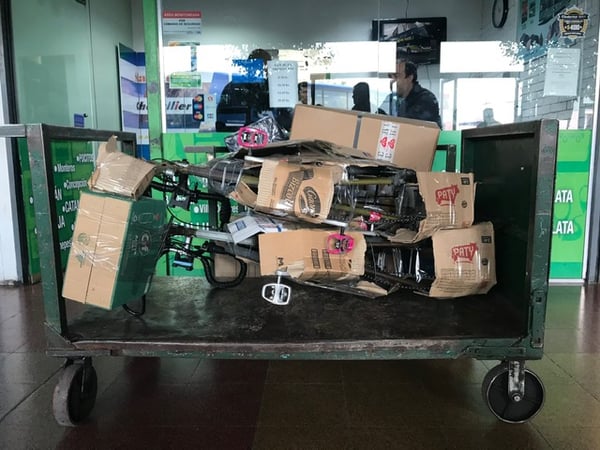 When we arrived in Cordoba it was late, so we told the bus company we’d pick up our bikes the next morning and got a nearby hostel. Upon further research we decided that biking two weeks in the pampas out of Cordoba, and three weeks total to Iguazu, sounded not very fun so we decided to cut out more bad riding with a second bus. The next morning we made our way to the Cordoba Bus Terminal and after walking and talking to various bus companies, we learned that this shipping method of a separate company under the same bus name was very normal. We found a great 11-hour overnight ride from Cordoba to Resistencia using bus company El Practico that would have us in Iguazu in a semi-scenic week!

After being shuffled around from shipping desk to shipping desk we found the El Practico kiosk. We should let you know that sometimes bus companies share shipping stations or companies so check around at various counters for your bus brand. El Practico partners with a company for this kind of shipping and they had stricter rules than San Juan. This meant we got sent to another desk to have our bikes basically saran-wrapped ($500 ARG Pesos or ~$13 USD). After an hour or two of wandering the terminal, going to wrong places, and nervously seeing two strong men man handle our precious bikes, the bikes were paid for (~$1000 ARG Pesos or $25 USD) and were to arrive the next day. Nervous again about our luck running out and our bikes not getting there on-time, we decided to be tourists in Cordoba for the day to give us a buffer.

When we arrived 36 hours later we found our bikes nicely waiting for us locked up in a mail storage room. The men there opened early for us and even gave us an exacto-knife to make unpacking easier.

So in total: After two bus companies, two packing sessions, and 22 hours of bus travel later our bikes were surprisingly unharmed and we put them together at the bus station, enjoyed a breakfast of coffee and medialunas (half-moons or croissants) and we’re on our way to Iguazu.

If you're considering taking a bike on a bus in Argentina, here are our tips:

Tip #1: Not all bus companies say yes to bikes so ask around everywhere first to compare companies, rates, and requirements for shipping. Some companies we asked flat-out balked at our request to put a bike on (one lady basically gave us a skeptical face then just went back to what she was doing). Others like the nice man at San Juan were more than happy to take our business without skipping a beat.

Tip #2: Don’t buy your passenger ticket first then ask for forgiveness because it honestly doesn’t work that way. Some companies simply don’t have the means to ship, so you’d have to find a separate bus company for shipping. It feels a lot cleaner to me to do the same bus company for both so your bike can physically be on the same bus as you. Go to the terminal, find the best company for both bikes and tickets, and always always ship your bike first. Once you know your adventure buddy is safe and sound, then take care of your own ticket.

Tip #3: These events happened in early March, at the end of high season. If you’re traveling in the middle of high season, we’ve read you need to secure your ticket and shipping way in advance, though we can’t say for sure as this was not our experience.

Tip #4: We only tried this in Mendoza and Cordoba, two of the largest cities in Argentina. We don't have experience in smaller cities so cannot speak to the availability of shipping centers at those bus stations. However, we plan to do this once more in a smaller town, so we'll update you on this later.

Good luck cyclists! Don’t suffer through the pampas when Argentina has so many more beautiful places you could spend biking through. Don’t be ashamed to take a bus! In my opinion its a better feeling than the dullness you’d instead feel with nothingness, flatness, and headwinds cycling weeks in the dreaded pampas.

For more stories from our adventures, be sure to check out our Cycling South America page.