Riding Among Giants: Our Journey Into NorCal

Reaching SF was a big goal of ours, and we were rewarded in spending a few days with our friends Pete and Colby, who graciously put us up for a few nights. It’s so good being able to see friends along our travels who we haven’t been able to catch up with in a while. These two days off helped us gather up the energy we needed to push up to Eureka, the next big marker as we cycled up the PCH.

Leaving SF, we got to bike over the famous Golden Gate Bridge. I was so excited to have the chance to do this, and while the winds made it a little dicey to bike the sidewalk across, it was everything that I expected. We stopped a few times to snap some picks as we slowly crept across the mammoth structure.

That evening, we slept at “China Camp State Park,” on the outskirts of Santa Venetia. We basically had the place to ourselves, which was great because we planned a “couch potato evening” at camp. What this means for us on the road is: we stack our ground mats on top of each other on one side of the tent (creating a makeshift couch), place a tarp on the floor (our coffee table), set my phone up on top of my front-bag (that’s our flat screen TV), and then order pizza to the campsite. Deluxe living my friends… deluxe living.

We thoroughly enjoyed watching some HBO and destroying a meat lovers pizza and then settled in for a quiet evening without interruption. 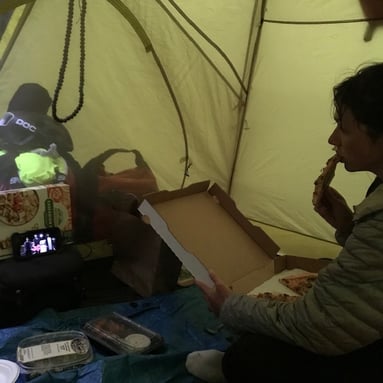 And then came the raccoons.

From the thickly lined forest around 5 or 6 of these fury monsters probed our site during dusk and planned their full assault once the sun went down. I quickly took to my phone to find the best way of fending them off and was presented with the main advise: DO NOT EAT OR STORE FOOD IN YOUR TENT

Well sh$$. I guess the pizza party was a bad idea after all. I was awake for the entire night fending these curious, relentless, and (admittedly) adorable monsters from entering our tent’s vestibule. Starting with loud shouts and whistles, I graduated to tossing small rocks in their general direction. This did little more than distract them for a few minutes, after which they’d return to wreak havoc.

Finally, around 4AM I fell asleep, only to be awoken two hours later by desperate shouts in the forest of “DANA!! DANAAAAA!” followed by sobs, cursing, and more “DANA!”

In my mind, here is what happened: this guy took his girlfriend out into the woods the previous night for a starlit night hike. They shared a few drinks, and then the guy started to act a bit weird, maybe he got a bit too handsy, and so she tried to run away. This date turned violent when she (Dana, I presume) slapped him in the face after a rude comment was exchanged and tried to make a run for it. He then gave her a heavy shove down a steep hill, where she hit her head harshly on a rock. The man took the long way down, only to find her not at the bottom, but missing in the dark. A potential murderer now walked the trails of China Camp, attempting to locate his injured girlfriend… and finish the job he started.

In actuality, we later learned it was a camper whose dog, Dana, got loose in the early hours of the morning. I like my story better. I mean, it would make for a much better Law and Order episode than what actually occurred, right? 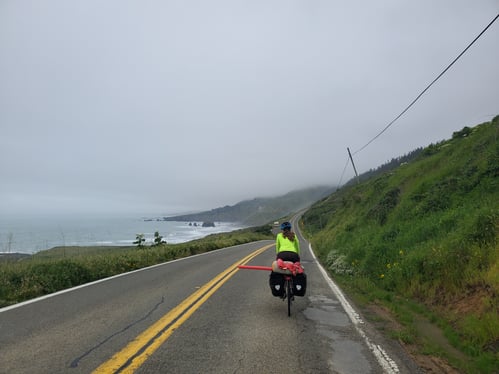 With tired eyes, we pressed northward, rejoining the busy 101 as the rain and wind set in around us. Since the next few days had more rain in the forecast, we decided to spend the night apart from wildlife in an AirBnB. Being who we are, we chose a non-traditional AirBnB, opting for an RV parked in someones front yard. This thing was actually pretty sweet, and having a bed to sleep in for the first time in a few weeks was really nice. We spent the following day off watching movies and catching up on the inter-web, while also putting a plan into motion for the next few weeks of riding.

The next day, we climbed back to the 101 and then to the 128 back towards the coast. The 128 was really beautiful, as we were surrounded by Redwood Trees and we had little traffic to contend with. We cruised along marveling at the nature around us, thinking that this was going to be a low key sort of day. That all changed when a truck driver rolled down his window next to Suzie and exclaimed:

“Mountain Lion! There is a Mountain Lion that’s been following you.” He then made a wavy motion with his hand.

“Yea, a Mountain Lion!” he responded. He then drove away.

After quickly informing me of the exchange, we frantically looked around, and when we could not see anything nearby, decided to book it out of the area. For the next hour, I intently observed the forest above for signs of the stalking predator and imagined myself being the guy that fended off a mountain lion with his bear hands. I’d be the king of Boonville! Everyone would be talking about it. Maybe they’d invite me onto Ryan and Kelley… who knows! Alas, the opportunity never presented itself and my calendar remains open for daytime TV appearances.

Rejoining the 1, our spirits dampened as traffic picked up and turned a blind eye to cyclists on the road. Despite no shoulder, heavy wind, and clearly struggling up hills, drivers south of Fort Bragg felt it was okay to basically push us off the road. This was beyond frustrating after 15 miles… so we took action.

Taking advice from a blog Pete showed us in SF, we hit up a Dollar General and purchased two brightly colored pool noodles. Not only are these great for impromptu light saber duels in the parking lot, but these puppies can also be strapped onto the back of a bike as a warning barrier between a cyclist and car.

We saw the result immediately: cars started giving us 5-10 feet and even seemed to be slowing down as they passed by. Do we look a bit ridiculous with foam pool toys dangling 3 feet to the left of our bikes… yes. Do we annoy cars trying to fly past as they observe what the hell is going on… you bet. And we are that much safer for it :)

We spent that night in a flooded campsite harassed yet again by raccoons. To be fair, I ate a Pop Tart in the tent before bed, which definitely was the cause of these rascals coming after us. I get it. However, I am not willing to let the raccoons win. You can take my sleep… but you’ll never take, my sweet treat before bed.

The road from Fort Bragg to Legget is of legend for cyclists on the PCH. It’s steep, windy, and absolutely breathtaking. For 22 miles, we climbed up and up and up into the clouds and wilderness. All of our training was put into play here, and we absolutely crushed it: 7,300 feet of climbing in 1 day across 84 miles. I now certify us as: baddasses. 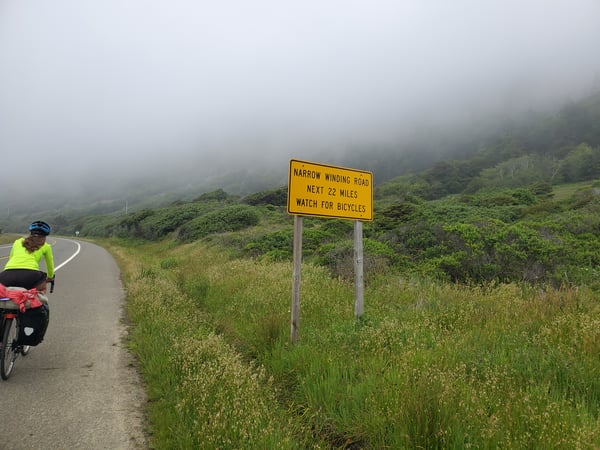 When we rejoined the 101 we fought up against some rough traffic and finally reached the fabled “Avenue of the Giants.” Despite being exhausted, we took in the first few miles of the road before landing at our campsite (Hidden Springs… or hidden valley if… you want some extra ranch dressing on the side), which warmly welcomed us with the sign “You’re Entering Bear Country.”

We awoke in the Avenue of the Giants finally feeling rested after an undisturbed night sleep. In theory, today would be easier since we only had 55 miles to travel and no major climbs. Unfortunately, the wind gauge had us at a disadvantage. I’ve always wanted to use “wind gauge” in a sentence after seeing Master and Commander… and now I feel as though I can check that box off (slight pat on the back given by… myself). Needless to say… the day was not what we expected.

The first 20 miles were spent riding the cruisy roads in and out of massive redwood trees along the Avenue of the Giants. This was perhaps the most beautiful road we have been on yet in California, rivaled only by Big Sur. The trees are just so massive, and its hard to pick a photo that truly captures the feeling of this place. Around each bend in the road, a new grove of giants presented itself to us, causing us to swerve into the middle of the lane at times as we tried to see the top. 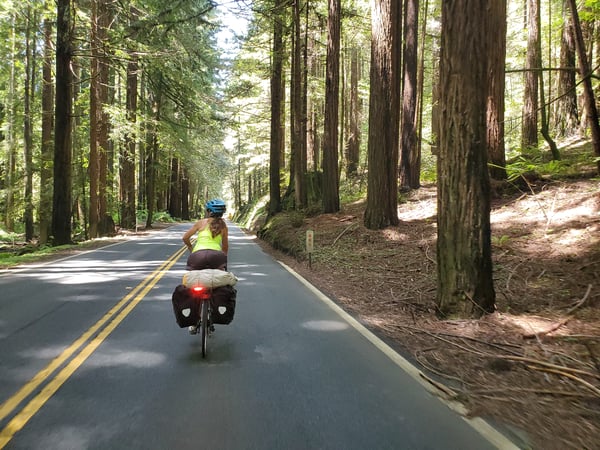 We knew the last 30+ miles would be tough into Eureka. The forecast for the day was “windy” and for once they got it right. The wind absolutely stunted our progress, and despite being on a relatively flat road it was hard to push any fast then 7MPH. The shoulder was luckily wide, but with the wind gusting in our face and riding on the side of a highway, there is not much to remark on for this stretch other than to say it was hard.

The positive here was that Suzie and I finished our book, A Gentleman in Moscow, which we’d been listening to on audio book the past three days. I know it’s a popular book right now, but if you’ve not heard of it, I highly recommend taking a look. Of all the interesting quips and quotes, the one that sticks out to me the most, and actually helped during the tough biking, was:

“Learn to master your circumstances, lest they master you.” This is certainly applicable as the rain and wind bashed me in the face trying to climb a hill with trucks driving 60 miles an hour beside me.

One highlight of the day was our stop in Rio Dell. Here, we had lunch at the Pizza Factory and spent an hour chatting with an old man who was very interested in our travels. He handed us a pair of wooden coasters to take as a souvenir and talked about his own adventures traveling by motorcycle in the Pacific Northwest. He was an interesting guy to be sure, and let us know that he’d always wanted to do what we were doing. His grand kids were equally intrigued by the trip and asked us about 50 questions on the sidewalk. They also dared, and then double dared us to pop a wheelie as we road off. Not going to lie… if a triple dare took place.. I imagine I’d be reporting that I flipped backward under my bike in an attempt to appease those two. Thankfully, the prodding stopped at the double dare.

This is what its all about for us: meeting new people and telling them about our adventures, and attempting to inspire them to do the same.

We finally made it to Charla and Dave's new house around 7 and visited with Suzies parents, where we'd spend the rest of the Memorial Day Weekend.

For all the latest on where we have been and where we are heading, be sure to check out our US Cycling page.