This week marked entry into our last country in South America: Uruguay. We have been excited for the prospect to reach this country and the excitement was well founded. Thus far, we have loved this country. The roads are well maintained, traffic isn't so bad, cars give us space on the road, and it's challenging enough riding the rolling hills where the ride stays interesting.

From a "less than ideal" crossing of the border to our push to the center of the country, this was a fun first week for sure, and we are only a week away from reaching the beaches on the east coast!

We began our day on an overnight bus from Posadas to Concordia. Arriving at the bus station around 7:00 AM, we were upset to learn that the company that shipped our bikes (Cruce de Norte) was closed on this random Tuesday. The only reason we spent five off days off in Posadas was that we were guaranteed the bikes would arrive and be available for pickup at this point. We could see the bikes in the office, yet no one was working there to help us get them. Adding to our boiling frustration, the employees in the station waved us away and were unwilling to help find some sort of solution. We did not want to stay another day in Argentina, so Suzie kept insisting there had to be a way, and eventually someone with keys unlocked the door and let us take our bikes.

Making our way through the center of town, we headed towards the ferry crossing that showed on the map. Unfortunately, when arriving at this crossing, the naval officer informed us the ferry did not exist and that we would need to pedal north to the bridge, about 15 miles away. This was a bummer, but not a huge issue since we knew it was a possibility.

Once we exited town and got onto the RNA015, the road was very pretty. For the first time since San Rafael, there were other cyclists out enjoying the day and the relatively flat road leading to the Rio Uruguay. We enjoyed these 10 miles and were in good spirits on reaching the border crossing.

Yet again, the border control agents would not let us cross the bridge into Uruguay, similar to our experience in Posadas. The difference here was that the agents did not help us and made us sit off to the side to flag down a truck across the bridge. This left a bad taste in my mouth and something that will take time to shake. It sucks when people blatantly ignore you when they are able to help (there was no one at all at the border and most agents were just watching TV) and you are so clearly in need of support. Thankfully, after about an hour and a half, Suzie was able to find Uruguayans with a truck who were all too happy to help. We loaded into the back of their truck and rode into the final country of our South America trip.

From Salto, we took the route 3 south along rolling hills and into Termas de Guaviyu. The wide shoulder and space from traffic was a welcomed change from our final days in Argentina, and we were happy to be in Uruguay. In Termas, we camped at the campground in the village, which I highly recommend. Other than the clean facilities and well kept spaces, they have three large swimming pools to relax in. This was well worth the 10 dollars to stay the night.

The next day, we stayed on the 3 through the heat of the day. As we neared Paysandu, we stopped at a gas station to break from the sun. Here we ran into Valentin, a fellow cycle tourist from the Canary Islands. He’d been traveling from Paraguay through a similar route and was finishing up in Montevideo. We decided to ride together into town and camped together in Paysandu. The campsite we chose, The Club Pescado, was fine, but expensive ($20) for the limited amenities. I would not recommend this but instead travel further north to the free camping site next door. 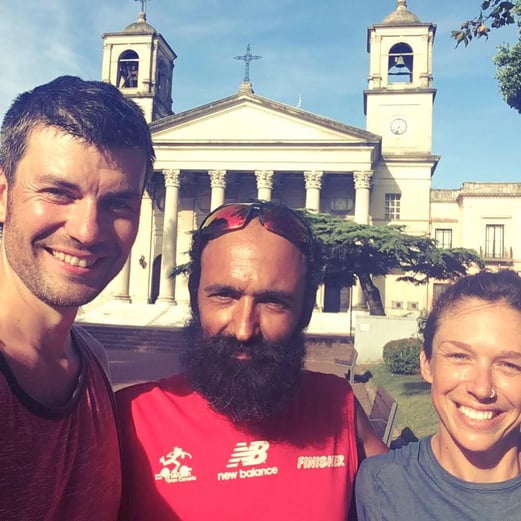 We split up with Valentin the next morning and stayed with the 3 for the entire day. The rolling hills, green countryside, and wide shoulder continued for us until reaching a free campsite next to a river. I highly recommend spending a night or a day at Paso de las Piedras campground. We were basically the only people there for the night. The facilities are great, your can swim in the river, and the sites have tables, fire pits, and soft grass to sleep on.

We made a push the next day into the town of Trinidad. The 3 stayed the same as previously mentioned for half the day, and then we lost the shoulder. It was tough biking with a strong headwind, especially in the places where the shoulder was gone and truck traffic was heavy. If you are on this road and have the time, I would stop at the Parque Andresito by the lake on the Rio Negro, as it is a gorgeous spot to camp and spend the day. We wrapped up the day by finally making it to Trinidad, were we spent the night and the next day off at the Hotel Maxim. 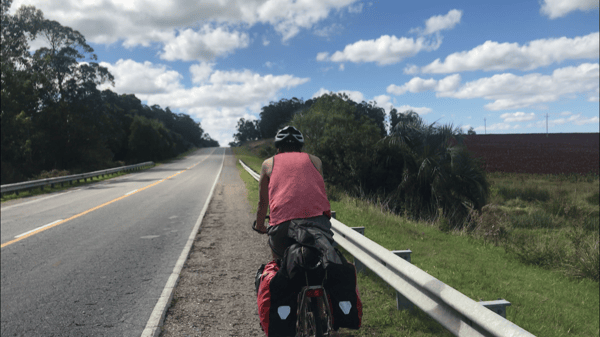 The last day this week was a long 80 mile push to Florida. With rested legs, we left the 4 and followed signs east towards Durazno. These roads were markedly less busy, but the conditions were still pretty good. This made for a nice and easy morning ride to the city. From Durazno, we joined the 5, another major north-south artery, and worked our way down to the city of Florida. This was a very similar road to the 3, though we had a shoulder the entire time, unlike the last half day on the 3.

Getting into town after dark made finding camp difficult. We ended up making it with some effort and were good to pitch camp for the night in a dark campground  on the outskirts where we were essentially alone.

Topics: Maps and Routes, Argentina, Uruguay, Challenges on the Road